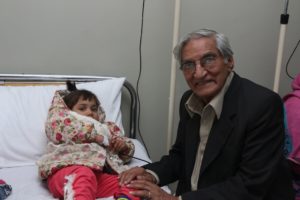 Munnu Bhai (6 February 1933 – 19 January 2018) was a newspaper journalist and columnist, poet and a great writer of Pakistan. Munnu Bhai started his career by working as a translator for an Urdu language newspaper but eventually developed into a playwright and a dramatist. His career as a drama-writer was primarily devoted to writing plays for Pakistan Television Corporation (PTV). As a playwright, Munnu Bhai’s most famous TV drama to date is Sona Chandi released in 1982. He has also written plays like ‘Ashiana’ and ‘Dasht’ and contributed in an environmental documentary- ‘Before It’s Too Late’. Tamanna, a UK-Pakistani production shot entirely in Pakistan with the soundtrack featuring Rahat Fateh Ali Khan is also written by Munnu Bhai. He has been one of the most outstanding and consistent writers in Pakistan.

His Punjabi poetry is considered as one of the best works in recent Punjabi literature and poetry. As a regular columnist for the Daily Jang newspaper, Munnu Bhai is considered to be among Pakistan’s best and brightest columnists. Munnu Bhai was awarded the Pride of Performance Award by the President of Pakistan in 2007 for his services to the nation. He was also rewarded Hilal-i-Imtiaz (Crescent of Excellence) Award on 23rd March 2018 for his notable literary services. He was a kind hearted man who spent his life for raising a voice for reality and justice.

Munnu Bhai’s love for humanity was beyond imagination. The greatest example of it is the Sundus Foundation, which was started for the purpose of treating patients suffering from Thalassemia. He was a man who served his country without any greed. Munnu Bhai was a writer who sensed the pain of society, he knew how to highlight the darkness of society so his writings reflect the actual face of the society. He passed away in Lahore, Pakistan, on 19 January 2018 at the age of 84. Although, he left us, his legacy still lives on in the countless contributions he made to the nation.