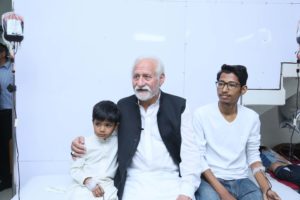 Mr. Khalid Abbas Dar, born 1942, is an actor, playwright, director, theatre producer, entertainer, mimic, one-man show and a television host. He has worked for over five and half decades and today Khalid Abbas Dar is recognized as a well-known entertainer in Pakistan. He was awarded Presidential Award for Pride of Performance in 1999, Sitara-e-Imtiaz in 2006-07 and Hilal-e-Imtiaz in 2013 by the Government of Pakistan.

Khalid Abbas Dar started his career as a child performer on Radio Pakistan in 1955, and was the first ever “One Man Show” performer of PTV ever since its inception in 1964. He has also worked endlessly for the people of Pakistan in collaboration with the Federal Ministry of Health across Pakistan, stretching over a number of shows to promote awareness on health issues such as Polio, Mother & Child, Malaria, Hepatitis, HIV; AIDS.

Mr. Khalid Abbas Dar has been associated with Sundas Foundation for many years and currently works with the foundation as its Director. He is one of the most active members of the organization who works endlessly for the benefit of the Foundation. Besides his very tight schedules, he ensures that he is available to attend all the main events arranged by Sundas Foundation and spends his full energies in helping the Foundation achieve its objectives.