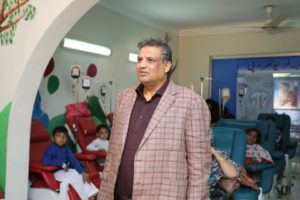 Sohail Warraich is a Pakistani journalist, television host, analyst and media personality. Warraich holds a master’s degree in English literature from the University of the Punjab, Lahore. He has been affiliated with GEO TV since its inception and had started his career in journalism through print media in December 1985. He is the host of GEO TV’s one of the most popular programs ‘Ek Din Geo ke Sath’, an interview-based TV program on lifestyles of celebrities. One of his other famous shows was ‘Meray Mutabiq’, based on Warraich’s analytical views on current issues. He has also authored two books Ghaddar Kaun? and Qatil Kaun?

Sohail Warraich has been actively associated with Sundas Foundation for many years and is respected as someone who has given outstanding services to the Foundation.